Featured, Lists, Member offers, Miscellaneous, Recommendations, Ten of the best, The Best of

Fine Dining in the South West - The Best Restaurants in Devon, Cornwall and Somerset 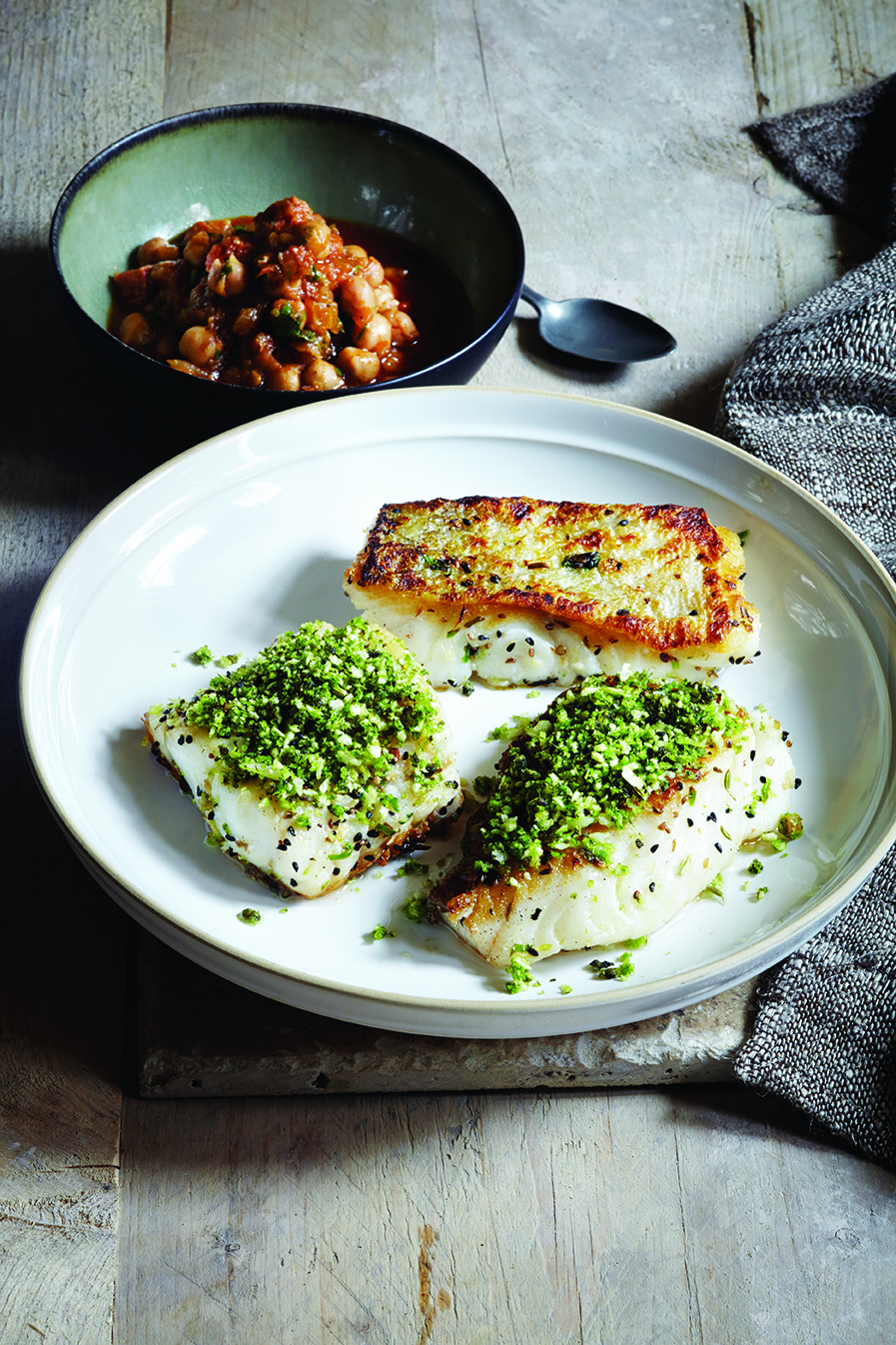 This recipe states cod, but feel free to use any thick white fish, such as like pollack, haddock, coley or halibut. In my opinion, nigella and carom seeds partnered with any kind of fish is a match made in heaven. The sparing use of spices still allows for the flavours of the fish to be appreciated. A Chickpea Curry makes for an excellent accompaniment. The green spiced breadcrumbs add colour, zing, and texture to the dish. Your guests will be impressed!

For the green spiced crumbs

To make the spiced crumbs, Preheat oven to 80–90ºC/Gas Mark ½. Mix together the breadcrumbs, chutney and sugar. Spread the mixture out on a baking tray and dry in the warm oven for 30 minutes or so.

Season the fish by sprinkling with the onion seeds, carom seeds, salt, coriander stalks and ginger, then set aside for 5 minutes to allow the seasoning to stick to the fish.

Heat a non-stick frying pan and drizzle with the oil. When the oil is hot, add the fish, skin side down, and cook over a high heat for 3–5 minutes (depending upon the thickness of the fish), without moving the fish. Let the skin get a nice crust, then add the butter and as it foams, spoon over the fish to cook in nut-brown butter. Turn the fish over and cook the other side for 3 minutes or so. Repeat the spooning of foaming butter on the other side too. Transfer the fish to an ovenproof dish, sprinkle generously with the spiced crumbs and bake in the preheated oven for just 3–4 minutes until the fish is cooked and the crust becomes crisp.

Remove the fish from the oven, squeeze with lemon juice and serve either on its own or with chickpea curry.

Vivek is the founding chef of The Cinnamon Collection since its launch in 2001 and defined the ground breaking food philosophy for which The Cinnamon Club is so well known. Vivek has always believed that as with other creative forms, Indian cuisine should also evolve over time.

By designing from the very outset a menu based wholly on modern Indian dishes, Vivek placed himself firmly at the forefront of the movement to take Indian cuisine ‘beyond authenticity’. Following up on the success of his modern Indian cuisine Vivek and his team launched Cinnamon Kitchen and Anise in the City in 2008.

Club offer: Member exclusively receives a complimentary cinnamon bellini for all guests when dining from the a la carte menu on days shown. Maximum party of eight. Click here for meal periods

Club offer: Members enjoy a complimentary Bellini and 10% off the food bill when dining from the a la carte menu on days shown. Maximum party of 8 guests. Click here for meal periods

Club offer:  Members receive a 20% reduction from the total food bill when dining from the a la carte menu on days shown. Maximum party of 8 guests. Applies to A La Carte menu only. Click here for meal periods