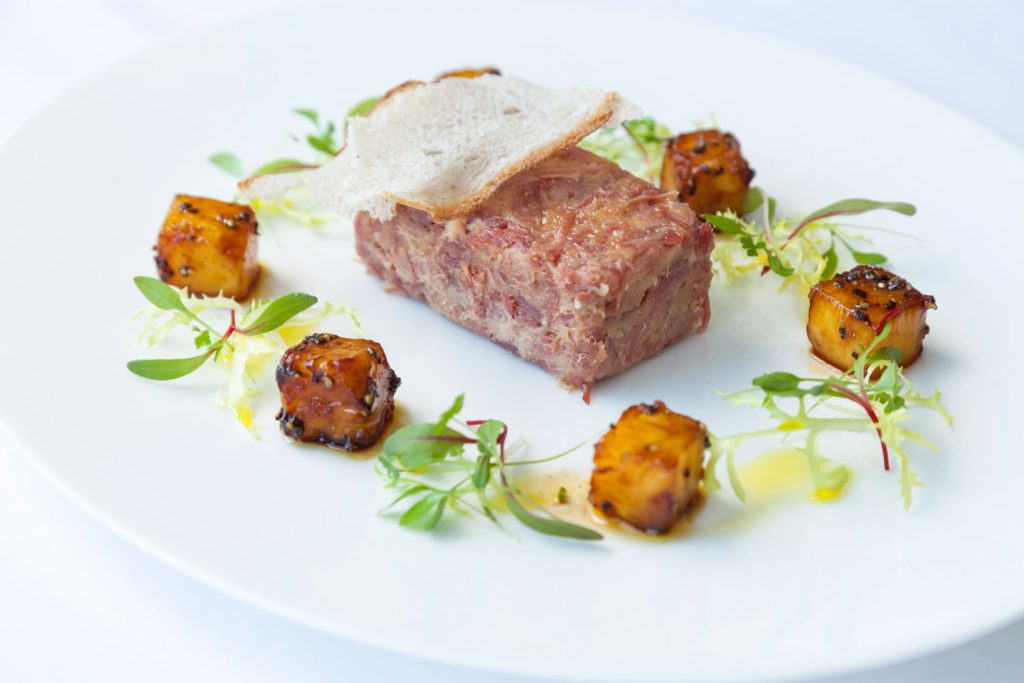 Gammon is a delicious and succulent joint that is very popular during the festive season, but because of its versatility it is perfect for all year round. A sweet glaze, a spicy glaze, as a roast joint, rashers or steak, there are so many options. Adam Grey, Head Chef at the Devonshire Club, offers a refined take on a gammon, to bring out the best in this meat’s mild taste.

Adam is an alumni of Raymond Blanc at Le Manoir aux Quat’ Saisons and Gary Rhodes, where he was made head chef of the Michelin-starred City Rhodes, maintaining its star until he left in 2003 to open the new restaurant Rhodes Twenty Four at Tower 42 where he maintained the star for eight years.

Adam has been Head Chef at the Devonshire Club since January 2018, the luxurious members-only club in the city where Luxury Restaurant Club members are able to enjoy exclusive access. Here he shares one of his recipes:

Bring to the boil and simmer gently for approx 3 – 4 hours, skimming away any excess scum. Top up saucepan with more water if necessary. To check if the whole gammon is cooked, the small bone at the base of the gammon should easily be removed.

Leave the gammon to cool down to room temp in the saucepan of cooking stock, and when cool remove the gammon and pick all the meat from the bones, discarding any fat, skin etc.

Pick the meat down into strands and mix with the chopped parsley and a little of the cooking liquor. Place the picked meat into either a stainless steel ring or a terrine mould lined with cling film and place in the fridge to set over night. Cut the peeled pineapple into 2cm cubes and roll in the caster sugar.

Heat a cast iron frying pan to a high heat and add the sugar coated pineapple cubes. They will instantly start to caramelise to a golden brown colour, so be sure to move around the pan so that they cook evenly on all sides for 2 – 3 minutes.

Remove the potted gammon from the ring and place in the centre of the serving plate. Spoon the peppered pineapple around and garnish with a selection of micro salad leaves drizzled with a little British rapeseed oil. Garnish with toasted sourdough bread.

Dine at the Devonshire Club