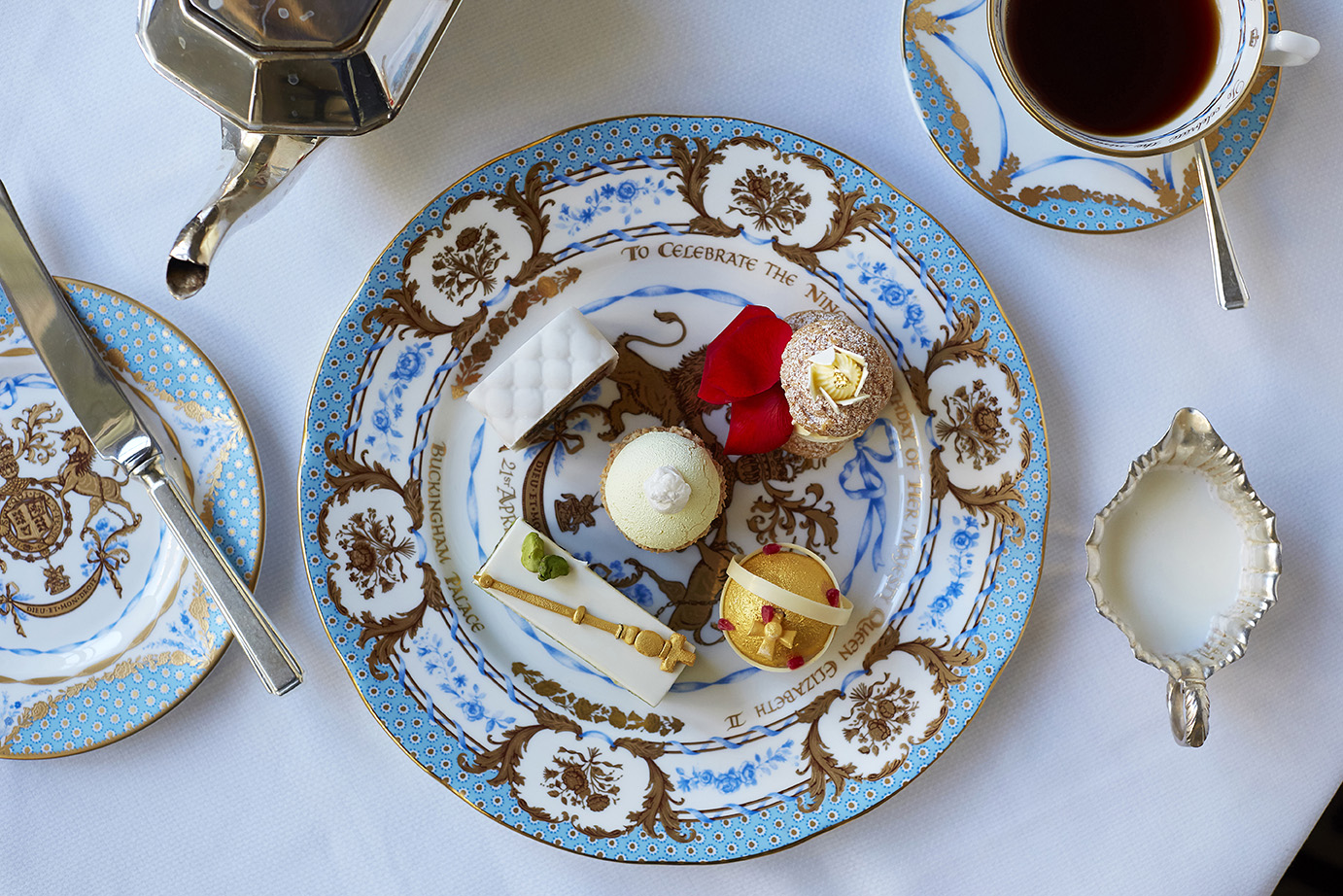 The closest hotel to Buckingham Palace, The Goring has been a firm Royal favourite for many years, since it first opened its doors. The coronations of George VI and Her Majesty The Queen saw the hotel filled with royalty attending these great occasions from all over the world. The Queen Mother also famously enjoyed Eggs Drumkilbo – a lobster and egg-based dish that remains one of the most popular dishes in The Dining Room.

In 1990, George Goring accepted an O.B.E. from Her Majesty The Queen at Buckingham Palace for ‘services to the hotel industry’. This was followed by the appointment of a Royal Warrant to The Goring in 2013 – the only hotel to have been awarded a Royal Warrant for hospitality services. It was also the hotel that the Duchess of Cambridge famously spent her last night as a  single woman.

The Goring have created a special afternoon tea in honour of the Queens birthday which includes Her Majesty’s favourite fruit cake, Queen Elizabeth Cake, Golden orb with a passion fruit centre and white chocolate ganache and Royal Opera Cake with pistachio sponge and chocolate ganache.

Menu available for a limited time from 4th April 2016 until the end of the summer. Please request HM The Queen’s 90th Birthday Afternoon Tea when booking on 020 7396 9000.

Member dining benefits are available in The Dining Room – click here for details.

Great Fosters has a long and celebrated noble history and has much evidence of royal use and patronage. It is documented that Henry VIII used the house as a hunting lodge, as did his daughter, Elizabeth. The properties royal connections are clearly identified in the original royal crest of Queen Elizabeth 1st above the main porch showing the date of 1598.

Enjoy a sumptuous afternoon tea in this very room with its stunning stone fireplace, or take it in the grand but comfortable main hall with its deep feather sofas.

Afternoon tea is available from £26.50 per person, or why not add a glass of Bollinger Rose or Nyetimber English sparkling wine for a celebratory touch! Call 01784 433822 to enquire on afternoon availability.

Member dining benefits are available in both The Tudor Room and The Estate Grill. Click here for details.

Hartwell has a remarkable history stretching back almost a thousand years to the reign of Edward the Confessor. It has been the seat of William Peveral, the natural son of William the Conqueror, and of John Earl of Mortaigne who succeeded his brother Richard the Lion Heart as King of England in 1199.

It was also briefly the residence of the French Royal Court, from 1809-1814 when the exiled Louis XVIII brought his family over including his niece the Duchesse D’Angouleme, daughter of Marie Antoinette.

It has housed residents from many of the England’s most illustrious families survived fires and provided billeting for troops during the second world war. When it auctioned off its contents in 1938 it was visited by Queen Mary and the Dukes and Duchesses of Gloucester and Kent. They brought with them a picnic lunch which was served in the dining room by a body of liveried footmen.

Enjoy full Afternoon Tea in the elegant surroundings of the Morning Room, Drawing Room, Great Hall or Library from £30 per person, call 01296 747444 for availability.

The Langham, London, Europe’s first “Grand Hotel,” opened on June 10th, 1865. Amongst those at the hotel’s grand opening were the Prince of Wales and much of Victorian high society. A hotel fit for an emperor, Louis Napolean III spent much of his enforced exile from France at The Langham.

It has been a much favoured spot of many royals over the years, including Diana, Princess of Wales.

The dazzling Palm Court is famed as the the place where the tradition of afternoon tea was born over 150 years ago, an indulgence that lives on today as Tiffin at The Langham. The beautiful art deco setting takes you back in time to an era of style and elegance. Guests can enjoy a bespoke version of the afternoon tradition “The Langham Afternoon Tea with Wedgwood” – serving Wedgwood specialty teas in tailor-made “Langham Rose” Wedgwood teaware.

Member dining benefits are available in The Palm Court, click here for details.

Inverlochy Castle sits nestled amongst the foothills of Scotland’s highest mountain – the mighty Ben Nevis – and in some of the most beautiful scenery in Scotland. The manor is surrounded by landscaped gardens and rhododendrons and is rich in landscape and history.

Inverlochy’s reputation for gracious hospitality goes back as far as Queen Victoria’s visit in the Autumn of 1873. Accompanied by her trusted ghillie, John Brown, Victoria found great solace in the castle and its breathtaking surroundings.

So enchanted was Victoria with Inverlochy, it has been said that this area may have become the Royal Family’s favoured Highland retreat, had Balmoral not already come to her attention. She spent a week sketching and painting where she wrote in her diaries:

“The setting sun cast a glorious light on Ben Nevis and the surrounding hills which were quite pink and gave a perfectly crimson hue to the heather on the moor below. The sky was pink and lilac and pale green and became richer and richer, while the hills in the other direction, over Fort William, were of a deep blue. I never saw a lovelier or more romantic spot.”

As one of the world’s most iconic luxury hotels, The Dorchester, London is a popular choice of the Royal family. The Queen attended a dinner party at The Dorchester the day before her engagement was announced, on July 10, 1947, to Prince Philip, Duke of Edinburgh. Prince Philip also celebrated his stag night at the hotel. He has subsequently been a regular guest of honour and renowned after-dinner speaker at events and charity functions held in the hotel, and on 26th October 1990, unveiled a plaque commemorating the reopening of The Dorchester after a two-year closure for refurbishment.

Since opening in 1931, The Dorchester Afternoon tea to live piano music in the glittering setting of The Promenade has been an institution among Londoners. In fact, The Dorchester was named London’s top ‘Afternoon Tea Venue’ by the Tea Council of Great Britain in August 2000 and 2003.

Indulge in an RHS Chelsea Flower Show inspired afternoon tea (another favoured venue of The Queen), with a glass of Laurent-Perrier Brut or Cuvée Rosé Champagne. Available Monday, May 23 – Sunday, May 29 inclusive, the tea is served in The Promenade surrounded by floral decorations by The Dorchester’s talented designer florist, Philip Hammond. The afternoon tea is served with a selection of flower show inspired French Pastries alongside signature sandwiches and sumptuous scones.

Member dining benefits are available at The Grill at The Dorchester, click here for more details.