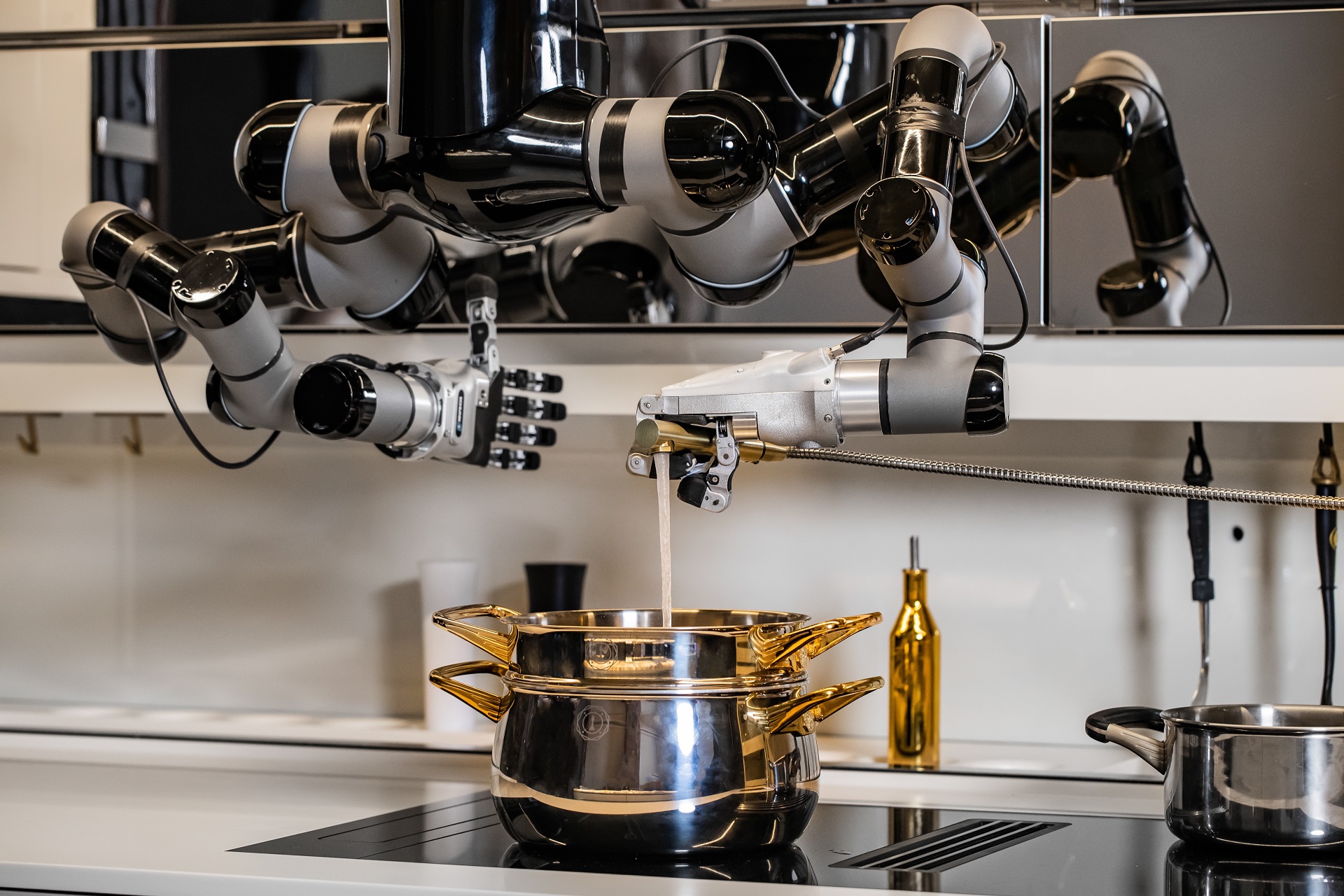 Full List of Michelin Restaurants for Great Britain and Ireland 2021

A Futuristic Vision of Dining

It’s a cliché that nothing ever stays the same, but how we live and act changes with our landscape. So it’s unsurprising, after all ingrained habits and patterns have been stripped this last year, to see the speed of new developments and our willingness to embrace them. To keep tabs, we bring you four visionaries thought-provoking views on the dining of the future.

Dr. Stuart Farrimond on The Future of Food

Dr. Stuart Farrimond, the writer, presenter, doctor and educator, is perhaps one of the most recognised authorities on health sciences through his regular tv and press appearances, including as the food scientist for BBC’s Inside the Factory, for over three years. Over a socially distanced lunch call this week, Tessa Shreeve (MD, Luxury Restaurant Guide) chats to Dr. Farrimond on how he sees the foods we eat evolving.

In May 2019, Dr. Farrimond produced an article on The Future of Food: what we’ll eat in 2028 for BBC Science Focus Magazine. It was an insightful read, so I was keen to hear if his predictions were still on track, or outlandish now … and indeed if he had any fresh ones.

We tuck right into his prediction for personalised nutrition with genetic tests offering healthy eating guidance for individuals. My confusion was how this would work in restaurants, “Think of Fitbit with personalised diet plans with the foods you should avoid; pictures you can upload of what you’ve eaten, all so you can check if it’s suitable for your physiology.” There are some apps out there already he advises, from some very clever people, but when he says that “personalised nutrition is closer than ever”, I wonder whether he means they are not accurate. “A lot of the information and the algorithms the apps use to draw answers is commercially sensitive, so it’s difficult to truly validate or demystify the machine learning conclusions.” Asked if he uses them, it was a defiant no, “I’m not a big fan of the idea as it takes away all the joy of food, but it’s on the way, it’s coming”.

How about fanciful foods vs natural, clean food, as his article predicted the craze for Espuma guns, but now we seem to be have more paired-back, simple cooking. “It will come and go in waves; it’s not a linear progression.” Farrimond says.

I was fascinated by the endless possibilities of his prediction for food engineered to be more nutritious. On the surface it has the power to balance the diets of poorer countries using genetic and biomolecular science to redress balances in protein, calcium, phosphorus, iron, riboflavin (vitamin B2) and vitamin C. Farrimond predicted this would be available by 2028. Was this still on track? He pondered, “Yes, it’s ongoing; a slow thing because of regulatory processes. This is going to happen; it is happening; yes I believe by 2028, the vision is probably right.”

I glibly switch to developed nations issues, and food engineered to be guilt-free; how close is ‘naughty food’ going to be made less ‘junk’ with lower calories. “This is more food-engineering, using alternatives, for instance to sugar and salt. Erythritol, which is a white sugary powder not dissimilar to sugar being a sugar alcohol, is increasingly being used in paleo friendly diets and ice-creams, becoming more and more popular with chefs. Essentially it’s inert; zero calories”. Bang, I’m sold! How about ways to reduce salt? I got a rather scientific answer here on nano particles, surface areas and synthesis; creating larger surface areas with less salt; either way it was beyond my physics grade, but I understood enough to share that it’s being developed but hasn’t made it to the market yet.

Then, vegetarians, prick up your ears up as I’m about to throw you a curve ball served up by our Dr. Farrimond. As a vegetarian of over 30 years I wasn’t expecting this; “Tessa, would you eat meat if it was a lab-grown meat?” Confused, I asked if he meant it had ever lived; it hadn’t. “This has just been licensed in Singapore by a US company and served in a restaurant for the first time in December”. No, I quipped, I couldn’t; but he says that guilt-free meat is here to stay – if you can stomach it. Why Singapore, “It has more of a need as a small country to import, and lab-grown shrimp and pork, particularly, was an attractive and more necessary need for its population.” From this I wonder on his thoughts about the snowballing movement towards meat-free, after all, isn’t much of this meat-free stuff just faked-up ingredients? “Meat-alternatives,” he says, “will take several strands – some good and some bad: There are the meat substitutes with plant-based ingredients, but indeed many are heavily processed; and then again whole-foods and vegetable diets which are good, but with an increasing use of marketing words such as ‘natural and clean’ used to describe processes – which doesn’t really mean anything.” Pressed on his view on the heavily processed variations vs meat, he would simply say, “It’s probably not going to be better.”

He has in the past talked about new flavours coming up, citing examples of bubblegum and energy drinks. So any pearls of wisdom on the next fad? Farrimond believes, “We can’t say what’s around the corner, it’s just serendipitous, but scientific food pairings has continued at pace in the last few years. By this I mean the growth in the science behind combining foods that share flavour compounds; so by looking at compounds you can predict what goes together. There’s a huge industry now with sites like food pairing.com a great source of knowledge and discovery.” I checked it out after, and although not a cook myself, it piqued my interest.

So as we approach the end of our conversation, was there anything else he was predicting. “Yes,” Farrimond adds, “with the world’s rich materials and the need to feed, unusual foods that are readily available will become more prominent. We need to find sustainable sources of protein; This hasn’t come in yet, but think it will: Jelly fish which are sporing and thrive in warm ocean temperatures, and actually quite a pest, are full of protein – you can buy it now in Chinese food markets and it’s quite tasteless, like mussels; but with some flavouring they work; Algae and the whole insects debate too – I don’t think the western world will eat them, but we may find they start grinding them up into our foods to increase the protein content of say pasta or flour.” That’s a hard sell I pose, but Farrimond believes if marketed effectively it could work, and envisages, “It will happen as it’s an easy and sensible way to feed the planet.” Cue my western squeamishness.

With all this talk of science and food, I wondered whether Dr. Farrimond was vegan and careful with his diet: “No, I love the idea of going vegan but my wife won’t let me”, he jokes and declares he loves his food and dining out. I had pretty fast realised that when we chatted about his favourite restaurants – a roll call of all the foodie haunts around Bath, Somerset & Devon; Menu Gordon Jones, Whatley Manor, Royal Crescent, Bovey Castle, The Pig – smart food choices, so I give him a few more tips of where to try, with Lucknam Park being top of my list. “Oh yes, that one I want to do”. His mindset is obviously an open one; constantly learning, collecting, seeking and appreciating.

A robo-chef that not only cooks but cleans may sound fictional tech, but excitingly the world’s first robotic kitchen launched January 2021. Fresh, expertly cooked meals could be yours at the touch of a button whilst you sit back, sip chilled wine and be entertained.

The intelligent gadgetry may be available now for wealthy influencers but could it vie more mainstream attention soon? Moley Robotics, a British technology company, thinks so. It has spent 6 years and reputed £10 million working with 100 engineers, product and luxury interior designers and 3 award-winning chefs to develop the first ever robotic kitchen – the Moley kitchen – a workable kitchen, and a machine. Each bespoke creation can be used by both humans and robots, together with a stunning selection of Moley cookware and utensils.

The machine at the heart of the new technology has two robotic arms with fully-articulated hands, capable of reproducing the movements and activities of human hands. This means it can retrieve ingredients from the fridge, adjust the hob, fill pans, pour, mix and plate up. And using optical systems and an integrated UV lamp, it can spot dropped food, clean up and make sure its germ free.

It’s not just a labour saving device however, it can also teach you to be a better cook with a series of pre-programmed dishes. The bespoke kitchens, available with or without robot arms, are now on show at the Moley London showroom, and are ready to be fitted. Try configuring your own kitchen online, or visit the Moley showroom. moley.com

From the artist, designer and creative chef Jasper Udink ten Cate, the founder of the Creative Chef Studio, comes a new and experimental way to interact with objects. Jasper has worked for Nike, Google and the Metropolitan Museum in New York, and the Morphing Table is a project in which Creative Chef collaborated with Designfabrik BASF last year. His vision is in the future, plates will no longer be needed to serve our food – it’s served straight onto the table, and as it does so the table adjust its shape. The video is a working prototype.

Although it may be difficult to foresee how some things will work in a restaurant, it seems fitting to finish on another cliché that where there’s smoke there’s fire.

3D printing has shown many great uses, and is gradually being used more for food products. 3D food-grade kitchen appliance printers that you fill with natural ingredients can be readily purchased. One of the trailblazers back in 2012 was a company called Natural Machines, makers of the Foodini (above), which has over 40 awards and recognitions, including it being a ‘top 10 food innovation that will change the world’. We ask its Cofounder and CMO of Natural Machines, Lynette Kucsma, how it’s being used.

“There are a number of reasons why chefs are interested in Foodini, a 3D food printer, but the top reason is around creativity and food presentation. With Foodini, chefs create dishes that aren’t possible by hand or with any other method. Foodini enables chefs to expand their creativity and have even more control in precision of food presentations. Ultimately, Foodini is a designed kitchen appliance. Chefs use it as part of their arsenal of appliances to make creative dishes and to help prepare food.”

Enjoy life more and dine out better with

Join
Back to blog